Tactical training videos on YouTube, Panteo productions, and Magpul are the modern equivalent of carpetbaggers. Not in the political sense, in which one tries to become an elected official in an area where they neither reside nor have connections, but instead in the historical sense of those who tried to profit off of the civil war divide.

There is no doubt that the last 16 years of conflict in the middle east have driven the firearms market, from a revolver/bolt action centric scene, to one of a more ‘modern/tactical’ driven market. Far be it from me to bemoan the whole affair, wishing more revolvers and ‘budget’ bolt-action rifles or lever guns handed down through the family. I enjoy shooting the modern sporting rifle, as I did during active duty.

While the modern propaganda machine, Hollywood, goes on speaking out both sides of its mouth (both sensualizing firearms and calling for more control of them) works well for the makers and sellers of firearms, it doesn’t do we the people any favors. Say what you will about Bradley Cooper, at the end of the day, no matter how many rounds he put down-range in preparation for his role as a Navy Seal, he is still no better off than my nephew in his caped pajamas with the a red and blue S on his chest. I don’t have anything against Bradley Cooper. I just take him for who he is, an actor. No, I didn’t see the movie; I saw enough of the trailer to make me not want to see it. Aside from the daylight-to-daylight phone calls and the non-existent chief bad-guy, the movie fails to grasp the life in the sandbox. I don’t know how many times I saw Iraqi soldiers try to emulate Rambo with the belt fed RPK machine gun. They all wanted to stand and fire from the hip. Claiming through broken English phrasing and gestures that this was a better way to fire, somehow magically increasing the hit probability while simultaneously causing the enemy to flee in the wake of their awesome ability. It was only after hours of classroom lecture, dry fire practice, and finally live-fire with targets at known distances did we convince them that it was better to lie down and use the sights. Even then, they were still shit, and ran out of their combat flip-flops at the first sound of a twig snapping.

Aha! You may exclaim, But what about those guys from the Magpul training videos? I got you there…

No, you really don’t. IF, for whatever reason, you think that after reading all of this, then you’ve missed the point. To begin with, a crack team of advertising executives, with one goal, created those videos: to make you buy their shit. I have no personal experience with either Mr. TuroSkin himself (Travis Haley) or The Boardwalk Beard (Chris Costa) to say whether or not they have your best interest at heart when it comes to firearm manipulation within the day in day out grind of life. Something tells me, no. They also have a whiff of that Kim Kardashian loop: they’re famous because they’re in that video, and they’re in that video because they’re famous.

I have no problems with people trying to make a buck. Hey, it’s hard out there and you have to carve in your own niche to thrive, but I think in the long run they do a disservice to ‘ our community ’. The idea that we need to train reflexive fire with our ‘carbines’ is beyond absurd. I like to play dress-up too, but as an adult we can only do it on Halloween without having nice conversations with our friendly local law enforcement officer on our Second Amendment rights. Furthermore, if you think attending a couple of rifle courses taught by a couple of gurus will make you into the rifle behind every blade of grass; you’ve got another thing coming. In order to get to that level of proficiency, you have to train with a squad of guys. Even then, you have to live and breathe the mud, rain, cold, and downright pain that comes with it. Still, that doesn’t guarantee that you won’t be the bullet sponge of the day, or live action land mine tester when and if that day comes. Let’s not forget that they’re entire jobs revolve around training for scenarios that they were trained on in the service of our country. It’s a false dichotomy, or a very expensive excuse as to why you bought an FN Scar in 308. What they sell doesn’t match what the everyday firearms community needs. We’d be far better off finding the local guys who know the same information, and practice with them.

Don’t think that just watching the videos will allow you to do the same thing, either. If that were the case, I’d be a level 12 Jedi, due to the amount of time I spent in an ambulance on a range for medical coverage while in the Army. I can think of better things to watch on the Internet that, things that give a big release of dopamine at the end. 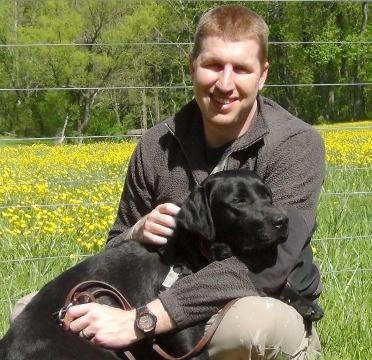 As a combat medic with the 82nd Airborne from 2003-2008, Luke Wayman deployed three times and was politely asked to join in the stop-loss associated with the surge of 2006-2008. His areas of deployment included: Fallujah, Iraq; Zurmat District, Afghanistan; and Bayji, Iraq. Wayman was honorably discharged from the Army in 2008, and currently works as a secret squirrel scientist for the Department of the Army. If you’re lucky, you can catch him starting controversies at a local gun shop by selling guns at a local shop. His service dog, Ike, always accompanies him.